ICTRegie is a compact, independent organisation consisting of a Supervisory Board, an Advisory Council, a director and a bureau. The Minister of Economic Affairs, and the Minister of Education, Culture and Science bear the political responsibility for ICTRegie. The organisation is supported by the Netherlands Organisation for Scientific Research (NWO) and SenterNovem.

Project:  From sketch to virtual worlds

New techniques to populate virtual worlds with smart objects
In huge urban game worlds most buildings are inaccessible since manually designing all their interiors is simply unaffordable. Enriching objects with real-world logic and mutual relationships can open up more interactive, convincing and immersive interiors. We developed semantic layout solving techniques that facilitate the automatic generation of such lively environments. Objects in virtual worlds are mostly related to other objects in their surroundings. A desk without a chair or a computer without a keyboard appear weird, so in a working office we see these items placed together, following some logical rules. This project investigates ways to enrich virtual objects with information about their functionality and relationships to other objects, in order to automatically find suitable locations for them in a sensible context. We developed a layout solving approach that uses these semantically-rich objects to procedurally generate and populate realistic layouts for virtual environments, e.g. building interiors, gardens or city streets.

We developed a semantic library with many classes of objects, each describing their type, functions, services, possible relationships to other objects, and also how players or AI characters can interact with them. For instance, you can define specific clearance areas around an object, e.g. to make sure there is enough space in front of a cupboard to open it. Using this information, our semantic layout solver takes a description of all objects desired in a given scene and incrementally determines sensible locations for each of them, in order to create a complete and meaningful layout.
To specify the contents of generic scene types, e.g. a kitchen, a living room or an office, we defined an intuitive description language, mainly focusing on the object types that can or should be present in such scene, as well as on possible, scene-specific relationships and qualifiers. Based on these descriptions, every instance of these scene types can be laid out using the semantic layout solver.
Eventually, every scene instance can also be automatically refurbished or decorated using semantic filters, typically linked to some predicate from the semantic library (e.g. dirty, antique or messy), further customizing its visual details without altering its specific intent.

Using the above descriptions and layout solver, level designers can quickly create virtual worlds. Since all its objects include functional information, sensible object interaction is at once embedded into these virtual worlds, making them ideal as exemplar worlds for rapid prototyping. We are investigating integrated methods to specify both semantic descriptions for game worlds and gameplay-related object interaction in order to test gameplay aspects much before level designers finished the entire world. Eventually, these prototype worlds have to be manually refined by designers. We are currently investigating how to guarantee that all sensible relationships set among objects are kept in that process. For this, in close cooperation with the other Workpackage 1.2 project (project 2 see below), we are developing semantics-based techniques for maintaining world consistency after each manual operation. Together, such techniques can allow designers to create game worlds quickly and efficiently without losing control over the final product.

Project: From sketch to virtual world
Virtual world creation mostly starts with designers sketching their vision. What usually follows is months of 3D modeling and manual fine-tuning every little detail of the world. Novel modelling and interaction techniques can spare much of this routinely work. Our prototype SketchaWorld, for example, generates virtual worlds from simple 2D sketches.
Automated content creation for virtual worlds has been around for years. However, it hasn't really caught on yet, as most virtual worlds are still modelled entirely by hand! This is because current content generation methods are often limited to creating one specific type of feature. They are typically very complex and difficult to use, and hard to steer towards a desired result. Furthermore, the generated content is hard to integrate into a complete and consistent virtual world. This project develops new content generation techniques and user interaction methods for making the automatic creation of virtual worlds accessible, controllable and efficient.

We developed a very intuitive content generation method called procedural sketching, for designers to interactively create their virtual world. Designers paint the landscape with colours representing steep mountain ridges, green hills, barren desert, etc. On top of this, designers draw terrain features, such as rivers, forests and cities, using simple lines and shapes. Meanwhile, as you sketch each element of the virtual world, it is automatically expanded to a realistic terrain feature. Furthermore, all generated features are automatically fit with their surroundings. For instance, a road's embankment is integrated in the landscape, and when it crosses a river an appropriate bridge is inserted in place. Automated content generation techniques as these will certainly never replace manual modelling. SketchaWorld's foremost application is enabling virtual world design by non-specialists, for instance, instructors creating scenarios for serious games. In addition, it is of valuable assistance for applications as concept design, rapid prototyping, and exploration of ideas. Moreover, the generated results can always serve as a sound basis for further enrichment using traditional methods. See www.sketchaworld.com for more details. We are currently cooperating with re-lion BV in making these techniques available for Dutch military instructors, to assist them in creating new scenarios for game-based training.

Using procedural sketching, designers can create complete virtual worlds in minutes. However, to create an environment that exactly matches their intent, designers need more fine-grained control on the generated content, e.g. they may wish to modify the course of a river, shift a street crossing point, or place an important building in a city. We currently investigate the integration of procedural sketching with manual editing operations. For this, in close cooperation with the other Workpackage 1.2 project (project 1 see above), we are developing semantics-based techniques for maintaining the world consistency after each operation. Main challenges here include preserving past manual changes whenever an area is re-generated, and balancing user control versus automatic consistency maintenance. We believe that a seamless integration of procedural sketching and manual editing can offer designers the best of two worlds, and enable them to freely experiment, eventually creating the virtual world that precisely matches their intent. 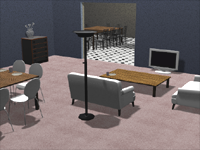